Converting reflection on TV screen to diffusion on sound

Reflection over the TV screen causes the collapsing the sound on 'Hi-fi' in the living space.

Pyramid TV Cover converts the reflection over the TV screen to diffusion on the sound for the presence of the sound stage and reality on music. 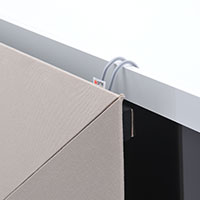 Pyramid TV Cover has the flexible arm to adjust it to the varied types of TV.

Set up on Pyramid TV cover is easy to adjust the flexible arm to the shape of TV. It is easy to put it on TV or take it off from TV.

The face on arte pyramid wall is not flat. Instead, the designed pyramid head is there. The technological pyramid head works on the balanced delivery from all 360 dimensions under its control.

表Allocation on large and small wholes over the its surface enables arte pyramid to absorbs the sound over high and low frequency consistently.

The sound or its energy out of control due to situations of the room or volume of sound can be floated and controlled by the wholes on the back side of arte pyramid wall.