Optimizing the sound in your listening room

Audio diffusion panel: arte pyramid wall produces the natural acoustic field over the room without loss of energy of sound.

arte pyramid wall tunes the sound on balance and enhances the reality on music beyond the physical dimensions of the room.

You feel being a vocalist signing in front of you or recognize the locations of the instruments in an orchestra or, hear breath and detect beat by Jazz musicians on the sound stage. 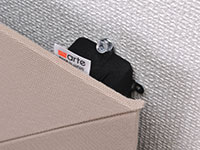 arte pyramid wall can be set up on the wall with a pin inside the box. It has only one step to be done. The pins is too slim and its whole is too small. You can have it anywhere with your own responsibility.

The face on arte pyramid wall is not flat. Instead, the designed pyramid head is there. The technological pyramid head works on the balanced delivery from all 360 dimensions under its control.

Allocation on large and small wholes over the its surface enables arte pyramid to absorbs the sound over high and low frequency consistently.

The sound or its energy out of control due to situations of the room or volume of sound can be floated and controlled by the wholes on the back side of arte pyramid wall.